Well, Elmer, my friend the mouse (See the Sharing the House With A Mouse story.), seems to either have a couple of friends or relatives sharing this house with him.  Suzi and the little tiny one, Tina?  It's hard to tell because I usually see them one at a time and they do have an incredible ability to change their shape and size to squeeze into different spaces.  So . . . what to do?  What to do?

During my last trip to New Zealand, I had several experiences of living in situations where I had a variety of illuminating experiences with rats and or mice, sometimes frightening, sometimes just irritating, and one that was simply heart-breaking.

Arriving unexpectedly, late at night, at a farm in the Hokianga, I was housed in this caravan. 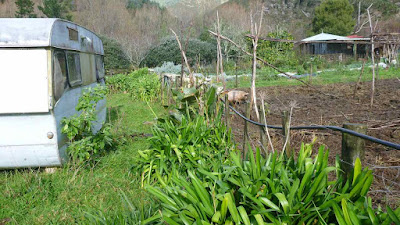 I discovered the next morning that the humphing sounds I’d heard during the night were coming from my next door neighbor, who, over the week I was there, I came to thoroughly enjoy. 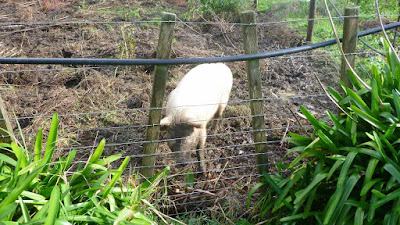 My biggest and most irritating concern, however, were my roommates.  It became obvious that during the several months the caravan had stood empty, a small colony of mice had taken residence and now claimed the trailer as their home. 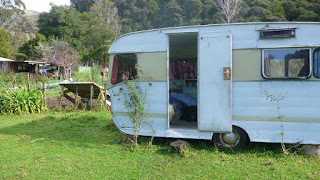 The next morning I discovered the traps that were available, which I set because I found it very difficult to sleep with all the little noises coming from the mice scurrying around carrying on with their normal nocturnal activities.

A couple of nights later I awoke to a loud squealing which I will never forget.  I had indeed caught a little mouse.  I didn’t know they had voices or could vocalize so loudly.  I picked up the mouse that was caught in the trap by one tiny forepaw and had to decide if I was now going to smash the little guy to death to compassionately put him out of his misery, or let him go to try to survive with a severely damaged paw.

Holding that little mouse, caught in the trap in my hand, I couldn’t believe the immensity of the mouse’s throbbing desire for life.  Its life force energy pulsed intensely with its huge desire to LIVE!!!  There was nothing to do but release it and watch it scurry away.

It was a profoundly emotional experience.  So when I discovered the mouse/mice? in this house in Volcano Village I thought long and hard about the situation and decided to to watch and observe them and see what happened as we shared the space over the two months.  (Thankfully, these mice never disturbed the space in which I was sleeping!)

They seemed to be quite inquisitive little creatures and there seemed to by a daily rhythm to their times to be out and about and active.  Observing their habits and favorite places to explore, made me aware of certain precautions that I needed to take.

Because of my experience in New Zealand I ended up deciding to not get or set any traps for the mice, figuring the person who lived in here full time could decide what to do about the situation when he returned home.

One afternoon a very bizarre thing happened.  A mouse came out onto the stairs, moving very erratically, trying its best to descend them, having great difficulty because it’s body was listing at a very strange and incredibly awkward angle.  To my amazement, it was moving around just as if it’s right front forepaw had been damaged.  (The exact same paw that the mouse I had caught in New Zealand had lost the use of.)  It was uncanny.  I didn’t know if the mouse there before me was an actual, real mouse or a spirit mouse that had come to teach me.

I sat on the steps with it and it allowed me to do healing work with it.  I could feel intense energy moving through my hands and asked for forgiveness from the mouse I had crippled back in New Zealand.  Forgiveness for not understanding and honoring the sanctity of all life, in all its many forms.

The next day I witnessed the mouse, not just climbing the stairs as in this video,

but joyfully and exuberantly leaping from one stair step up to the next, totally healthy, acting as if nothing had ever happened.  So, was it the injured mouse who had miraculously recovered?  Or was it just a different mouse relaying a message of exuberance for life?

Perhaps I am indeed forgiven by the spirit of the mice?  Or perhaps the mice have played their parts in “my movie” to utter perfection!!!

Perhaps I can forgive myself.

I never saw that injured mouse again.  And indeed there were days when I didn't see any of the mice at all.

So what REALLY happened?   Was it reality?  Was it just an illusion?

I recently visited the house again for a couple of days and found proof that the mice weren't just figments of my imagination in a back corner in the kitchen! 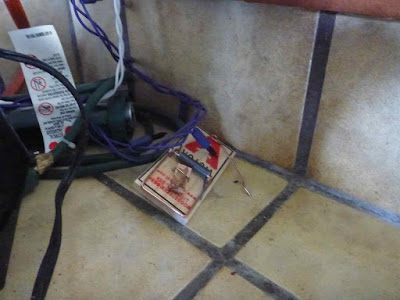 Posted by EarthSong Network at 09:00