NEW MOON
I have been called to the Hokianga region of the North Island of New Zealand, arriving on May 6/7.  Yesterday I finally found out why I’m here!  My friend, Pania, introduced  me to a local woman, Suzzanna, and I learned about the work her small, dedicated group has been doing the past few years planting crystals back into the ground in the mountains of this area, creating a crystal network.
From their pamphlet: INTO THE MYSTIC:  “It is known that crystals transmit and receive energy waves.  Every crystal holds a memory of where it comes from and ancient truth.  They have the capacity to radiate pure love energy when they are in Mother Earth because they are part of her.  They connect with each other and make a network - like a huge cobweb.  People all over the earth are putting crystals back into her.  We, North, South, East and West have been putting crystals back within the Hokianga, mostly on the mountains of the ‘House of Ngapuhi’ plus other mountains we have been guided to.  Now we have been asked to anchor our network which has created a dome.  We are to place large crystals at Cape Reinga, a sacred site to the west, Mania and a sacred site to the east.  This will enable the pure energy ascending from the Hokianga Harbour and from springs around the area to gather in an underground condenser then be distributed through the world for the benefit to mankind and the planet. …  In 2010 a friend told me that before the Hokianga was so called it was known as ’The Wellspring of Light for the world’  The crystals are enhancing this energy and transmitting this ancient vortex of energy out into the earth’s atmosphere.”
Suzzanna, Pania and I agreed to meet this coming Tuesday for the new moon so that we could 'sing the crystals,' nourishing and thereby activating with loving human vocal sounds the crystal network that Suzzanna’s group has put into place through the years.  Back in my room, I looked up my last email from Soluntra King to read her info about this coming new moon and discovered that Tuesday is actually the day after the new moon, but also the day that a very important planetary activation is taking place.  Click here to read about  MAY 18/19 - PYRAMID ACTIVATION OF THE GRIDS TO 5D.
I invite you all to link up with me, heart-to-heart on Tuesday, May 19 (NZ time) I’ll be here in Hokianga 'singing the crystals' as part of this planetary activation of the grids.  (This will be on Monday, May 18 for those of you in the USA)


MY PERSONAL JOURNEY
It’s been a while since I communicated with all of you on my EarthSong newsletter list.  Intense times for me and probably for most of you as well.  I was in the Dunedin area on the South Island of NZ for most of Dec., Jan., and Feb,  doing earth energy work on the Otago Peninsula (South Island of NZ).  The last ceremony, creating sound sculptures with several young girls and their mothers was quite a profound experience for me. 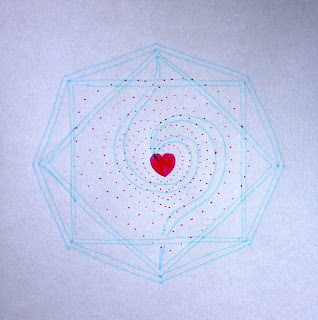 This was a vision of the Sound Sculpture that we created out on the beach in early Feb. and the spiral action was very rapid, agitating quickly, reversing direction back and forth.  One square represented old energies leaving and the other represented new energies coming in.  Experiencing the sound sculpture energies has helped greatly in understanding what is happening for everyone these days.  It’s like we’re all in a huge washing machine on high speed being agitated back and forth: “Out with the old, in with the new!  Out with the old, in with the new!”
In order to enter NZ when I left Bali at the end of November, I was required to purchase an exit ticket from NZ, and the one that manifested was a ticket that took me from Christchurch to Brisbane to LA.  I couldn’t figure out why I was to be on a plane to Brisbane, which seemed a very convoluted way to get back to the USA.  But every time I asked, I got that that was the flight I was meant to take.
So when I finally left NZ at the end of Feb. and was on that Brisbane to LA flight, I found myself seated next to a young couple and their 5-month-old baby, Mateo.  I have never before experienced such a short, easy 12-hour flight.  I felt a lovely, deep connection with Mateo giggling and laughing with him, getting to hold him towards the end of our journey together.  Arriving in Portland to visit my friend, Kahea, I discovered I was literally bouncing with happiness and high, good-feeling, very pure, positive energy.  I have come to think of it as “Angel Baby energy” that got triggered by my “baby blessing” from Mateo.   I experienced Mateo as one of the incredible new little beings coming in with a tremendous energetic gift to share, and that spending time in his presence, infused me with some sort of energy that activated something in me that had been dormant for a long, long time.  My Kahuna friend, Iliana, described it as being similar to the process of jump-starting a dead battery.  May you all receive a “baby blessing” some time soon.  Such a huge gift!!!
I spent a couple of intense weeks with Kahea, as we practiced co-creating 10/10 > 11+ situations, focusing on creating the best of the best for both of us as much as we could.  Then I continued on to Ashland to ground the energies of my travels and work in Bali and NZ into the Mount Shasta region.  I soon discovered that I was not meant to work with any of the groups I connected with and felt puzzled about why I was there in Ashland.
Then on April 10th my 90-yr.-old father suffered a massive stroke.  I am very grateful that I had had a few good weeks with him before it happened and that I was there to support my mother’s transition into a new state of being. For those of you who ddin’t already know I have shared my experience of my Dad's transition online: Celebrating Clark.  I feel very blessed to have been witness to his dying process, coming to realize that there are many, many different ways of dying just as there are many different ways to experience birth.  I feel much more at ease with the prospect of facing the “birthing" process of my own death someday.
I had thought I’d be in the Mt. Shasta area through the June Solstice, but found myself quickly propelled back to New Zealand instead.
Years ago I created a sound sculpture up amongst the stones at Castle Hill on the South Island of New Zealand.  I used stones I found there to create the images I saw in my mind: the double spiral, the arrow, and finally, the pyramid with light bursting forth at the top.

I understand so much more about the concept this sound sculpture was bringing to me all those years ago.  As we learn to open to and draw upon the energies of the earth and the energies of the Divine and simplify and focus our lives and our intentions, we become powerful beacons of light.  I meet more and more people who doing this very consciously, intentionaly re-creating themselves and their world around them.
Many, many blessings to all of you!
Namaste,
Leslie Lightfall
May 16, 2015
Opononi, New Zealand

So sorry, forgot to include the link to Soluntra’s description of the Pyramid activation for May 18/19.   Hope that get’s you to the correct part of her website, upcoming cosmic events..
Posted by EarthSong Network at 11:39