Songs From My CD Albums

Links to songs from my CD Albums which were uploaded to Youtube by CDbaby:

All songs were written, performed and recorded by Leslie Lightfall.

Let Go, Clear It Out

Sing to the Morning

Song of the Chasm

Song of the Tides

Song of the Waterfall

Song of the Kelp

Song of the Ancient Voices

Song of the Kauri Tree

Song of the Guardian Rock

Song of the Geothermal Valley

Song of the Moon Mother


Posted by EarthSong Network at 14:12 No comments:

Dancing With My Dragon

During the fourth Power of Shamanic Communication class last night, I entered into the Power Animal meditation wondering who would show up.   I have developed very strong connections with humpback whales/dolphins, dragons, eagles, wolves, butterflies and bumblebees and many other creatures through the years and was curious to see who would appear.

I went down through pond, through the tunnel, but I couldn’t perceive myself as being in any particular landscape, and was trying to make that happen when suddenly this huge dragon appeared right in front of me (felt like I was facing north). I told him I was quite happy to see him, but if dragons were my power animal then I wanted to have four of them show up. I immediately felt a dragon approach from behind me (south) and it was like it was wrapping its huge wings around me in a very nurturing and protective way. Then a dragon appeared from my right blowing fire (East) and after a brief pause the fourth dragon, mostly black, appeared from my left (West).

I’ve been thinking a lot about the various kinds of dragons, earth dragons, fire dragons, water dragons and feathered air dragons ever since Tracey pointed out the dragon image that appeared in the photo of putting my talking stick into the water when I posted the original photo on our Facebook community group page. 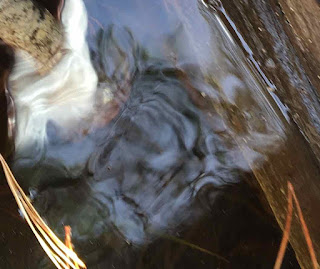 Dancing the dragon energy after our meditation was very powerful for me and brought those deep tears of recognition and connection that melt your heart wide open, and I am grateful to our course instructor, Lynn Andrews, for that opportunity to create a more conscious connection with my dragons!

The “crystal” I chose to embody the spirit of my Power Animal is not a quartz crystal. Evidently it is a piece of tektite - glass that was formed when a meteor hit the Earth near Medicine Lake. I had wanted to have a piece of lava from the place I was called to sing at an obsidian flow a couple of months ago near Medicine Lake and was very pleased when this piece of tektite called me to come get it from a shop in Mt. Shasta the day right after our third class (Talking Stick).  When I got it home and communed with it, it told me to call it “Voice of the Dragons.” 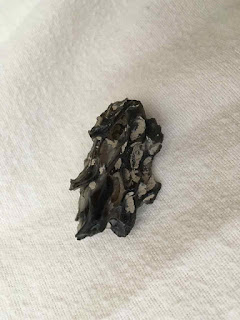 I felt like my dragons rejected the idea of being housed in the piece of tektite, but clarified that it was a meeting place I could go to access them if I felt in need of a physical object to focus on to do so.

The necklace in this photo is one I gifted myself with after spending two months in Bali singing to and communing with the earth there.  My dragons are very much involved in guiding me and calling me to sing to the Earth in various locations around the planet. 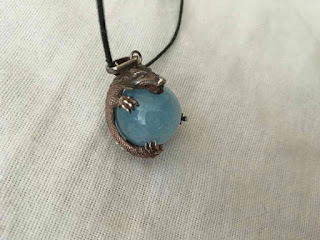 We had quite a bit of discussion in our break out group last night after that class about dragons and this morning I remembered Soluntra King’s website. She has several articles about Dragons and Dragon people that have been incredibly helpful to me for learning more about my connection with dragons and dragon energy. Since several people posting seem to be connecting with Dragons, here’s a link to one of her webpages on the subject: http://www.evenstarcreations.com/index.php/ra/dragon-friends/dragons-lore.

Many people are awakening and remembering their multi-dimensional connections these days.  The dragons are very important allies.


Namaste.
Posted by EarthSong Network at 10:20 No comments: