Song of the Sea Turtle

My first encounter with sea turtles happened during a visit to the Big Island of Hawaii.  I discovered one sunning itself on the hot sand while out for a walk along the beach with several new acquaintances.  Excusing myself from the group, I stayed behind to photograph it. 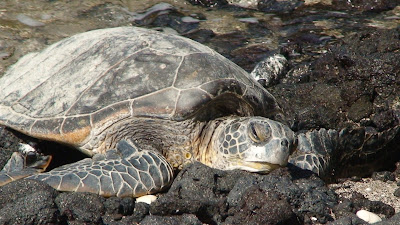 By the time the group returned, sea turtles had gathered near me one-by-one, until seven of them were sunning themselves side-by-side. 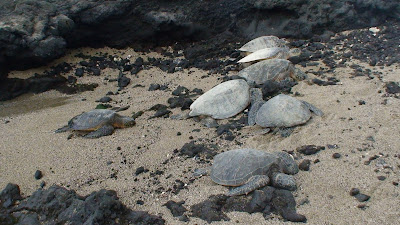 After seeing them lined up like that on land, I was quite eager to see them swimming in the ocean.  I created the sea turtle song after meeting a sea turtle while snorkeling in one of the other bays.  It slowly arose out of the depths swimming directly towards me.

The song is just a simple chant that mimics the slow graceful movements of the sea turtle underwater that I copied whenever I was swimming with one of them.  A strong pull with it’s front flippers followed by a long glide before the next stroke.  Allowing the momentum of each deliberate stroke to carry it forward rather the paddling frantically.  A valuable lesson for our current times.

One day I shared the song with a couple of young men while we watched a sea turtle feeding as you will see in the video down below.   I was quite taken with how the sea turtle allowed the huge waves to place it.  Even if the angle was a bit awkward it would chomp away on whatever was available wherever it was until another big wave came to carry it off to a new location.  It demonstrated how to allow the huge forces of nature to do most of the work and simply cooperated with whatever was happening and made the best use of the opportunity provided. 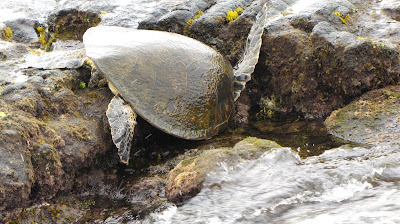 I taught the sea turtle song to a small group that gathered next to the ocean to create a sound sculpture ceremony with me that same year.  After teaching that group their song, I would usually have a sea turtle approach me and swim with me (just like I swam with the dolphins) whenever I went in snorkeling.

On another trip to Hawaii, I visited Kauai, and up on a cliff, I observed a channel below where at least sixteen very large sea turtles were being pounded amongst sharp, rocky outcroppings by huge powerful waves.  The message I was given was, “If you want to be out in the world, dealing with huge waves of energies, you have to take time to lie in the sun and harden your shell.”

On another trip to the Big Island, I visited a friend who happened to be caring for a little boy that day.  She had just taken him to visit another white-haired friend of hers.  The woman had deeply frightened the little boy and he was very clingy when he saw me.

She asked me to sing something soothing, so that he would calm down and have a different, gentler kind of experience with an older woman, so I sang the sea turtle song to him.  During the very few minutes I was singing the chant, he totally relaxed and fell asleep in her arms.  I sing it to myself when I need or want to calm myself down. 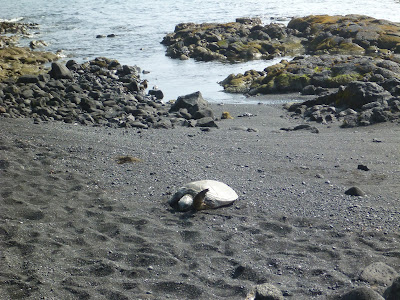 So please enjoy this video and feel my love and appreciation for the sea turtles and all that I have learned from them over the years.

Posted by EarthSong Network at 11:03