Before leaving Volcano for the last time this trip, I visited Pele at the Kilauea Crater to express my gratitude.  Many tears of fullness, of gratitude, of feeling so much at one with the lava and with the island.

The early morning sky was stunningly clear and bright blue.  An amazing and welcome surprise after several days and nights of heavy vog and rain. 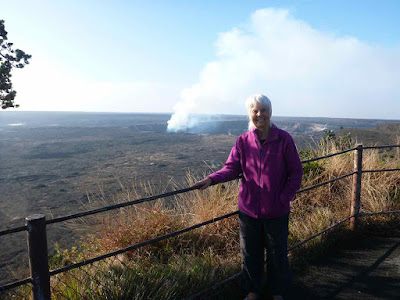 Just as I was leaving Volcano National Park, I saw this young man and observing his joy in his mode of transportation, I suddenly knew that the next stage of my life is about the getting to know the young ones, learning about the new/old ideas they are bringing to the planet at this time. 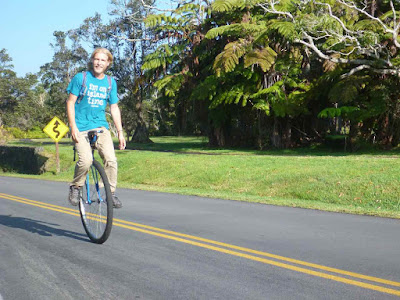 I headed down to South Point, the southern most point of the Big Island.  South Point is a very special, sacred spot and throughout its existence has seen many voyagers set off for long journeys across the sea.  It felt most important to visit there before I departed from the Big Island, just as it was my first stop when I arrived on the island last August.

On the way to South Point, I stopped off at Punalu’u to see my friends, the sea turtles.  Most were in the water, but one of them had come out and was sunning himself on the black sand.  So I sang The Sea Turtle song to him.  Then I told him about how much I have learned from the sea turtles over the years and expressed my deep gratitude for their continued existence and my spoke my prayers for their well-being.  I asked that this turtle share my message with all the other sea turtles. 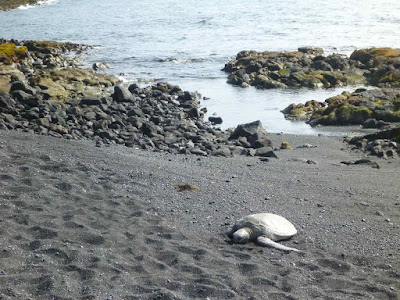 Just like last time, I received a big, extended flipper wave.  Astonished to have this happen a second time (see Sea Turtle Waves Back story), I almost forgot I had a camera in my hand, but just managed to catch the tail end of the magical moment in a photo this time. 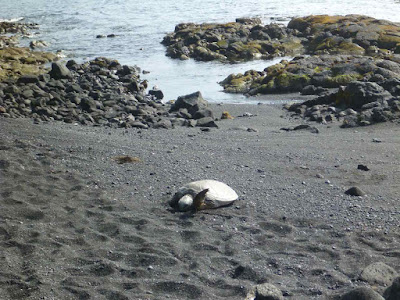 My next stop was to sing to this this lovely tree, who had called out to me when I first arrived on the Big Island, wanting me to sing to it and commune with it. 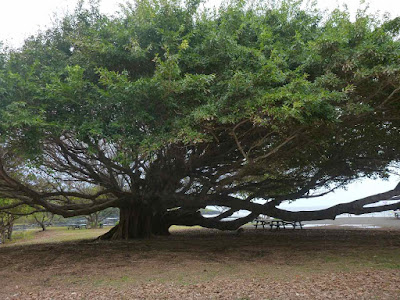 A much loved tree, its covered with names and initials carved by several generations.  Looking at it's huge roots and it’s wrinkly bark, I felt at peace with my own aging process. 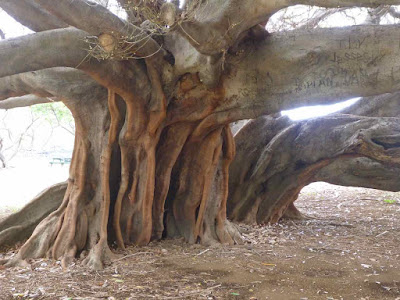 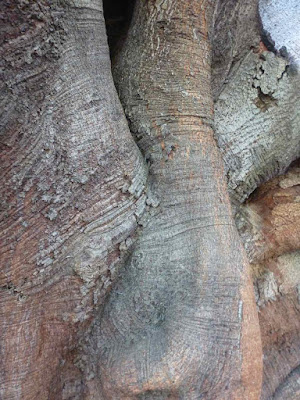 Arriving in South Point, I found that the grass was very, very dry.   Often it can be incredibly windy out here, but the breeze was relatively gentle and very welcome in coping with the dry heat.  I found a good place to park, for the night. 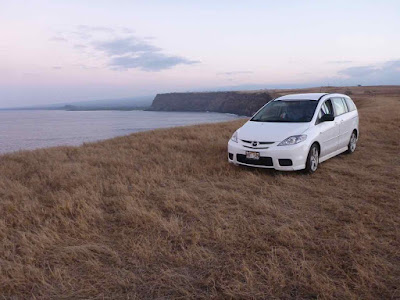 Clouds built up and delivered a bit of rain, leaving behind that wonderful smell of dampened dry grass that I remember so well from the living in dry grassy areas of northern California and southern Oregon.

During the night I awoke to a clear, starry sky and watched a several shooting stars whiz by.  One was so brilliant and close I was afraid it might land, but it blazed away as it passed overhead and finally fizzled out over the ocean.

Fireworks to celebrate the end of my time here on the Big Island!!!

I watched the dawn approach and tried to get a picture of the crescent moon and the close of this part of the lunar cycle, getting ready for the beginning of the next. 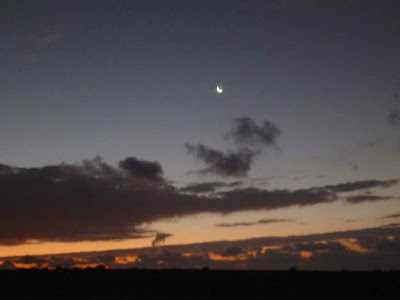 Later that day, as I headed to sing at my favorite sacred spot at Pu’uhonua O Honauanau, I drove around a bend in the road to see two fully grown turkeys on either side of the road.  A bit later there was a pile of feathers in the middle of the road where another one had been run over.  I pulled over, feeling a need to walk back and see if I could get a feather.  Turkeys are considered by some peoples to be a symbol of gratitude and Turkey Medicine is often associated with the Giveaway Ceremony.

Some fluff rolled towards me across the pavement.

Two turkey breast feathers were stuck together and floating gently to me.  A reminder to give that which comes from a warm heart, lightly.  Why two?  Hmmm . . . 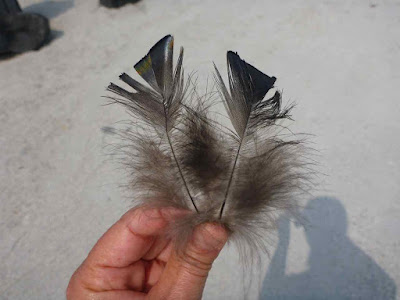 Just before entering the City of Refuge, I have a ritual of stopping to get Plumeria blossoms that have fallen to give to the ocean and Pele when I sing. 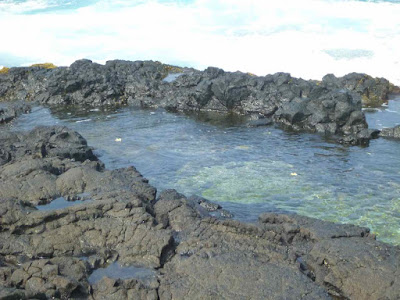 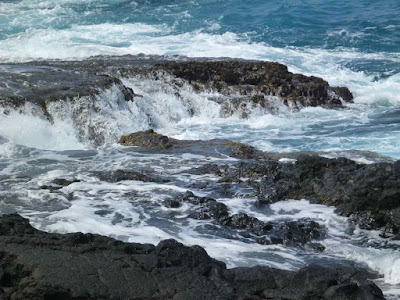 This time I felt called to also release my two turkey feathers to the waters.  They were a bit stickey and to release one of them I had to really work hard to let it go, it kept sticking to me and the wind kept blowing it away from the active waves. 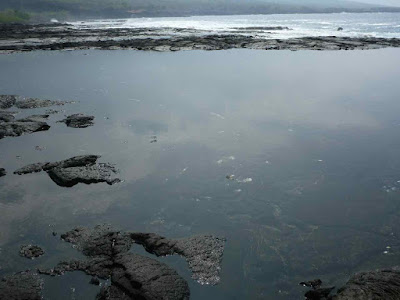 So finally I turned around to release it into the quieter waters behind me. 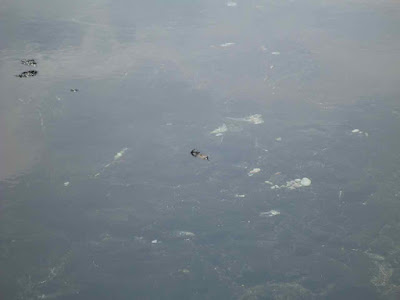 I had the extreme pleasure of singing in unison with the ocean’s movements.

When I was done singing, while I was expressing my gratitude to all the spirits and elemental forces of that spot (who now, after many years of singing to them, reach out to greet me like an old and beloved friend) the ocean surged up mightily and flowed around me on both sides.  After all these years I was prepared for her magnificent response and managed to come away with dry clothes, sandals and water bottle still intact.

Today I woke up early and returned for one last sing at Honaunau before continuing north along the coast to Manini beach where I met a wonderful new (human) friend who greatly amplifed the power of my singing with her presence when I sang to the lava rocks dancing with the ocean there at that point.

Tomorrow, which happens to be the New Moon and Solar Eclipse, will be spent packing and then off on a late flight, shifting to the the very different world of the Saguaro desert in Tucson and the red rocks of Sedona in Arizona.

Aloha, Big Island!  Thank you for your BEINGNESS and all your many huge gifts to me during my time here!!!  I feel very full of living lava life force energies and am most blessed by my experiences of the past 6 months.

Posted by EarthSong Network at 06:55