The Sea Turtle Waves Back

Yesterday, Dec. 2, I was called to visit a beach where sea turtles are often seen lying in the sun on the black sand beach.  Looking down along the beach I didn't see any turtles, so I walked out on the boulders near the parking lot and sang to the ocean and the high winds that were creating a magnificent show of waves and high-flying plumes of ocean spray as they danced together.

No sea turtles in sight, I turned to leave, but felt called to walk down the beach anyway.  What had looked like a large stone from a distance turned out to be a very large and magnificent sea turtle.  I didn't have a camera with me, so you'll just have to imagine a sea turtle that was much larger and more ancient looking than this one: 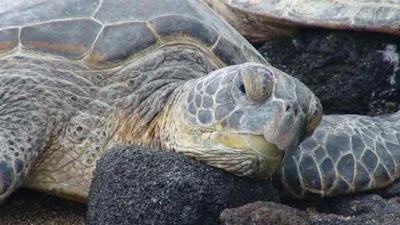 I spoke to it, thanking it for all the many lessons I have learned from sea turtles over the years and asked it to communicate to all sea turtles my gratitude for all the important insights I have gotten from spending time with them.

The sea turtle moved his "shoulder" slightly and I felt he was acknowledging that he would pass on the message.

Many years ago, I wrote a song for sea turtles which depicts their slow, graceful movements in the water - a strong pull with their front flippers followed by a long, relaxed glide.  On a couple of occasions, I taught this sea turtle song to a few other people.   After that, when I was snorkeling, I would often have sea turtles approach me face-to-face and then turn, inviting me to swim along with them for awhile, side-by-side.

So, when this huge sea turtle acknowledged hearing me, I sang the sea turtle song for him.   Here I was on the beach, moving my arms widely as if I were pulling my way through the water, while I was singing to him, with tourists standing all around us.

As I was coming to the end of the song, the sea turtle raised one of it's front flippers way up in the air about a foot or more above its body.  Since sea turtles usually lie on the sand in almost complete stillness, this flipper-wave felt like a very deliberate and clear acknowledgement of his receiving my song to him.

I left in tears of deep gratitude for our sacred connection and communion.

I have been wondering how many of the scenes in the High Tide Trilogy movies were to be filmed. The intention is that the living creatures in the movie actually participate co-creatively.  I was filled with the knowing that this will be possible, that the creatures will "hear us" and will show up and be able to participate as needed.

Returning to the very quiet, peaceful place where I have been staying for the past couple of days (which quickly manifested after my clarity about what I needed for my own health and well-being which came out of the goat adventure), I also realized that the sea turtle had called me to remind me what to do to not only for dealing most effectively with combative situations, but to avoid creating them for myself in the first place.

I was filled with the knowing that it was time to relax and recuperate.   I now have a room that catches the sun most of the day, but I hadn't taken the time yet to simply sit still and soak up the sunlight. 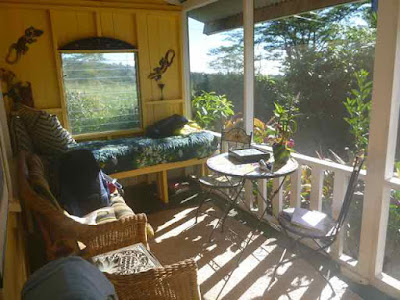 My communion with the sea turtle reminded me of one of the lessons I had learned from observing sea turtles on previous visits to Hawaii:  If you want to play out in the big waves and deal with huge forces that can bash you into rocks, then you have to take time to lie in the sun and harden your shell.

So I sat still for a while, just quietly soaking up the healing rays of the sun.

The other thing I remembered learning years ago as I watched my sea turtle teachers as they rode the waves in and out of the rocks along the shore, was that thet let themselves be carried by the movement of the waves.  If they landed in an awkward position, they would simply enjoy whatever was available in the situation, munching away on anything within reach.  Then, rather than struggling and working hard to get themselves into a better position, they would simply wait for the next wave to come that was big enough to easily lift them up and carry them off and out, into the deeper waters of the ocean once again.

May we all allow the tides of life to bring us with ease and grace to the perfect place at the perfect time.   May we all remember to take the time to sit in the sun, center in stillness, preparing ourselves for dealing with life's challenging moments.

Aloha.
Posted by EarthSong Network at 19:20