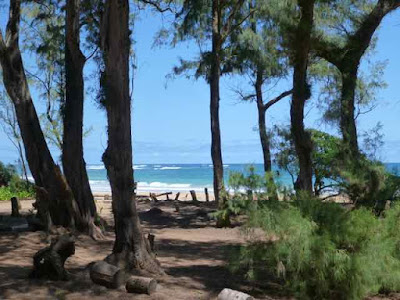 I am extremely blessed to experience so much magic and so many miracles as I travel around the world!  Sometimes, however, it is a bit challenging to be me and do what I am being asked to do!  (Many of you who are reading this are probably feeling the same way these days about your own paths of service as the energies continue to intensify and accelerate!) 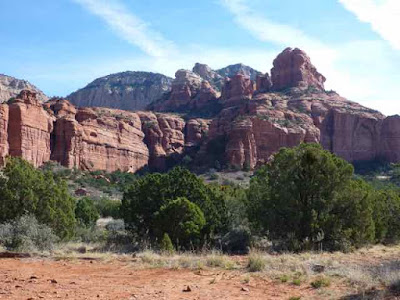 In Arizona, I wasn’t sure I was going to be able to get myself to the Phoenix airport.  Driving down 7 lane freeways at 65 miles an hour with traffic rushing by you on both sides at 75mph + doesn’t mix well with the deep energetic states of being I must live in to do the work I am called to do.  (And this was late at night in order to avoid rush hour traffic.)

I seem to be called to one power spot after another and move in and out of the many different belief systems and energetic states held by the people who are stewarding the land in each of the different locations I visit.  In between I travel through airports in hugely populated cities with immense vibrational pollution.   So I am very, very grateful for the individuals I meet along the way who DO understand what I am doing and help me out in a multitude of ways.  Without their understanding and support and ability to deal effectively with the technological world, it would be impossible to do what I do.

As my ability to look at things multidimensionally increases, there is less of sense of judgement about the situations I find myself in and more a feeling of acceptance of “what is” knowing that everyone is personally experiencing and going through what is needed as part of the global evolutionary process, transitioning into new ways of becoming aligned and living in harmonious relationship with the higher vibrations of the New Earth.

However, feeling the calling of the Earth herself and the layers of residual dense and toxic emotional energies of past human lives that can abound in a place is not a particularly pleasant thing to do.  My job, however, as I understand it, is not to attempt to fix anything, but to simply bring in the new energies and anchor them in each place.  It is then up to the people who live there and steward the land to clear and cleanse and do what needs to be done, so that all can live harmoniously in the new higher vibrations.

Many of the places on Earth that are still alive and loved and are able to receive energy from humans are on lands stewarded by indigenous people who have managed to protect and honor the sacredness of the land.  In many places they are actively taking steps to return lands once taken from them back to a state where they can again fulfill their sacred purpose.

Last August, towards the end of my last trip to New Zealand, I stayed with a Maori woman who took me to the world premiere in Auckland of an extremely important movie, “Ever the Land.”  This documentary is about the process that was gone through in New Zealand in which the New Zealand government made reparations for its previous decimation of the tribe, returned stewardship of their forest and awarded them enough money in settlement to provide for the creation of a huge community center - a "living" building.

It was a hugely emotional experience to be at the premiere where the Maori people of the land where the theater was located provided a traditional welcoming ceremony for the tribe about which the film was made.  And to watch the movie with the people whom the movie was about.  I feel this film is extremely important and would like to see EVERYONE around the world see it.  The website for the film is evertheland.com.

Returning to Hawaii after doing years of EarthSong work in New Zealand, it felt to me like Hawaii IS a foreign country.  It all is very sacred land and needs to be cared for in a way that honors its purpose.  I’m not sure that is possible under the influence of the USA government and American life style priorities.  There is much going here in the islands about returning to Hawaiian sovereignty and reversing the illegal USA takeover that annexed Hawaii as a state.

While in Arizona, it appears to me that the Hopi have withdrawn to a great degree from economic exchange with the outer world, are closing their ceremonies to outsiders, and simply trying to protect their reservation lands as best they can from what I personally consider to be the utter madness of the western, consumer oriented society now swirling around them in Arizona.  In this map, you can see the the "politically defined" Hopi reservation is like an island within the Navaho reservation.  As I traveled around, singing to different places in the northeastern quarter of Arizona, I learned that many of the places considered very sacred by the Hopi extend out into a very much larger region. 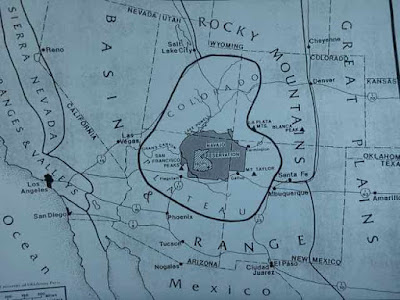 Ownership of land is an interesting concept.  From what I see as I move around the planet, the Earth truly belongs to those who love her, respect her, try to understand her and work to take care of her.  All the rest is political gibberish and will become more and more irrelevant as the Earth and humans “wake up” multidimensionality and move into cooperative, higher consciousness ways of being and living co-creatively with the planet.

As I travel I am meeting beautiful new souls, babies, young adults, and children.  I recommend that instead of focusing on the horrifying news broadcasts through the media that you look around and find these new arrivals.  Get to know them.  Support their growth and development into their full use of their profound power, abilities and skills.  They are a breath of fresh air and are looking at this world they’ve arrived in with open minds and hearts and strong spirits.

May we all remember our true priorities and where it's most important to focus our energy and the power of our attention!!!

Posted by EarthSong Network at 08:55