In 2000, I happened to meet New Zealand author and storyteller, Barry Brailsford, at the CWG Center in Ashland, Oregon the afternoon before he was scheduled to give a talk.  I was there to check on a series of paintings of mandalas that were on display, and we got to talking.  I sang some of my songs for him and showed him some of my other artwork.  He told me I needed to share what I was doing, get it out to the world.  He also urged me to come to New Zealand.  Before we parted that afternoon, he gave me a small piece of pounamu, a form of jade that is native to New Zealand.  Thus began the next phase of my spiritual journey, deepening my ability to commune with this magical, miracle-filled world that surrounds us.

The little piece of pounamu felt like a friend.  It “talked” to me, saying “Come to New Zealand, come to New Zealand!!!”  I kept it in my pocket during the day and slept with it in my hand at night.  After three days, poof!  It disappeared.  I didn’t lose it.  It simply disappeared.  I felt validated when a couple of months later I met a woman whom Barry had also gifted with a piece of pounamu.  I discovered that she had had a similar experience - her stone disappeared as well.

I had never traveled outside the United States at that point in my life and the idea of visiting New Zealand was a bit daunting.  I had lots of loose ends to tie up and changes I needed to make in how I saw myself before I was ready to get my passport and attempt international travel.

I was also inspired to create “Leap of Faith,” a painting of twelve frogs. 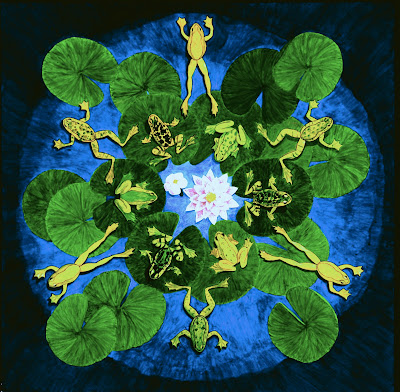 Initially I was quite intimidated by my vision, because I had been painting mostly pure geometric type mandalas up to that point.  “Frogs!?!?  You want me to paint frogs?”  But it was clear that this needed to be a mandala of frogs representing the various stages of commitment to taking a leap of faith.

It expressed the concept contained in that well-know quote by Goethe, “Until one is committed, there is hesitancy, the chance to draw back, always ineffectiveness.  Concerning all acts of initiative and creation, there is one elementary truth the ignorance of which kills countless ideas and splendid plans: that the moment one definitely commits oneself, then providence moves too.  All sorts of things occur to help one that would never otherwise have occurred.  A whole stream of events issues from the decision, raising in one's favor all manner of unforeseen incidents, meetings and material assistance which no man could have dreamed would have come his way.  Whatever you can do or dream you can, begin it.  Boldness has genius, power and magic in it.  Begin it now.”

The frogs in the totally stretched-out position illustrated the state of full-out commitment, no going back.  The others represented the various stages of preparing to commit.

I managed to come up with a design by creating a sort of template for each type of frog action that represented my own steps in preparing to face the unknown.  I couldn’t get them to fit together as their feet overlapped.  My mom suggested having three frogs turn around and face the lily pads in the center.  I objected.  That positioning didn’t fit with my concept at all.

And then I realized - the true message of the piece was that sometimes the leap of faith is to be still and meditate, going inward into the silence - when other aspects of your being are screaming to take immediate action.

The painting helped me release my need to control everything and allow it all to unfold instead.  The song “Leap of Faith” popped into my mind one day, giving me a bit of chuckle about my whole self-preparation process.

It was four years later that the urge to visit New Zealand suddenly became so strong that I felt like I would die if I didn’t go.  Trusting that it was now time, I answered the call, bought my ticket and went.  As our plane drew near to Auckland, New Zealand, I felt Mama Earth reach up and wrap her huge arms around me with an incredible “welcome home.”  I sobbed as the plane prepared to land.

That first trip to New Zealand changed me forever.   The Earth speaks very loudly and clearly in New Zealand.  I have been blessed to live there approximately 8 years out of the last 12, visiting sacred places on both the north and south islands and living in various places where I was called to interact and commune with the land.  My time in New Zealand opened up a whole new level of relationship to the Earth and her energies, the elements and elemental forces and various her various creatures beings.  After purchasing a small van, I spent much of my time alone in wild places, listening to the Earth and deepening my awareness of mySelf.

Here's the "Leap of Faith" song video that's on Youtube.

Posted by EarthSong Network at 04:24