First Call
I felt the invitation to Waipi’o Valley when I first landed in the Kona airport back in August (2015).  In the airport lobby, a brochure for horseback tours into the valley sang out to me, the picture of the lush valley floor and steep canyon walls calling out and inviting me to come visit.  My ten weeks of communing with other sacred spots on the Big Island helped prepare me for my Waipi’o experience in mid-October.

The Rim
The way to get to Waipi’o opened up very magically and abruptly.  I was gifted with a ride from one side of the island to Waipi'o and guided to a place to stay on the rim with Colleenah.  I arrived in pouring rain, feeling very disoriented and wobbly.  Early the next morning Colleenah very abruptly, out of the blue, announced that when she was called to something, she just dove right in, and that I should be ready to leave in 5 minutes and she would drive me to the Waipi’o Valley Lookout and I could get on with it.

Her manner was so intense, unexpected and so bizarre I figured it was probably meant to be, so I hurriedly threw together some water and food, a hat and umbrella, and raced out to where she sat waiting in the car, honking to get me going.

At the lookout, she dropped me off, quickly left, and still feeling really disoriented, I burst into tears - a mixture of emotions both the suddenness and abruptness with which she left me there to experience “whatever,” and with the huge, powerful flow of energy that was pulsing out of the valley welcoming me.

I walked down the the covered area to figure out what to do, and decided to just sit there and sing to the valley from the rim as the road down is extremely steep and slippery with all the storms that had been flooding the valley. 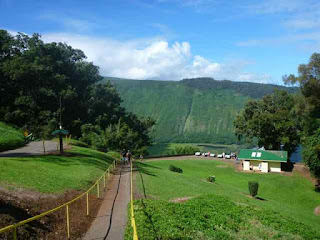 I stayed there under the overhang of the building and sang until I felt more in tune with the situation and aligned with the energies of the valley and then after a couple of hours got up to read some of the signs for visitors that gave important information about the valley, and its history as home to Hawaiian royalty.  One of these talked about the concept of respecting the valley land and waiting to be invited to come down to visit.

I asked within if I was complete and should head back to Colleenah’s but got “no” there was someone for me to meet.  Soon a very beautiful, peaceful, calm woman came and stood with a friend, chatting, right in front of me.  From the little bit I overheard, it was obvious that she was local and well acquainted with the deeper energies of the area.

I said, “I think I need to talk to you?!”  I told her I was feeling called to go down and stay for a few days in the valley and did she know of anywhere I could stay down there and be both welcome and safe?

Waipi'o Valley is known for it’s intense energies that amplify whatever vibration you take down into it.  It’s said to be a dangerous place for those who carry large amounts of density, toxicity and negativity.  Likewise, those who come in joy and gratitude to honor the land and the spirits of the valley can have very profound, magical, blessed experiences.

She suggested that I walk a ways down, that there was magic available and I might meet someone who lived in the valley along the road, even if I didn’t go all the way to the valley floor.   I felt ready to give that a try, gathered my stuff and set out down the steep, narrow incline that only 4-wheel-drives can navigate safely.

The Guardian Stone
I walked as far as my legs could handle and felt that’s enough and asked “do I need to go further and got ‘no,’ so I turned to climb back up the hill.  After a few steps, I realized that that didn’t feel quite right and asked if should I go back to the top?   I got ’no,’ and that confused me until I realized I was standing next to this big boulder that I had felt been calling out for my attention as I walked down. 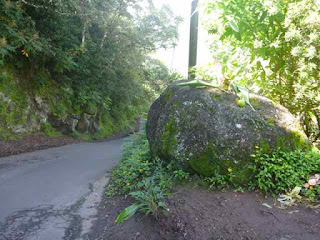 As I approached the stone, I was filled with the knowing that it was a guardian stone, a portal of some kind.  It felt to me that it acted as sort of a megaphone for communicating with the energies and entities of the whole valley.  So I sent my greetings from all the lands where I have traveled and sang my deep Aloha and respect to the valley.  I stated that I felt I had been called and wished to come down for a few days, but that I would need a place to stay where I could feel peaceful, safe and be undisturbed.  So if I was meant to come down and commune, please help me to find a place to stay.   And if I were deemed not energetically ready to visit yet, to please accept my deep love and gratitude for my experience of the valley from right where I was.  And I sang my aloha to the valley as deeply and fully as I could.

Climbing back up to the rim, I spoke with the ranger who had heard Colleenah describe to me where she lived in order to get directions back to her place.  Either he misdirected me or I misunderstood, because I ended up walking a long ways along a road that I didn’t remember ever being on before.  But when I tuned in, my guidance was to keep going, even though I appeared to heading out into the countryside on a main road and away from the neighborhood where Colleenah lived.

Finally I spotted a little snack shack type place and grateful walked over to it and asked the proprietor, Tony, if he knew where Cemetery Road was, that I was trying to find Colleenah’s place.  He lived just a few houses away from her and kindly gave me directions.  Before I left, I asked if he happened to know anyone who had a place in the valley where I might be able safely stay alone and commune the energies of the valley in peace and quiet.  He said he had a place that was still under construction, but that I could stay there for a couple of nights and he would take me down in the morning.

Electric Storm Preparation
I found my way back to Colleenah’s and that night we had the most incredible lightening storm I have ever experienced in my life.  It lasted for hours and hours.  A bit of thunder and a bit of rain, but mostly this incredible light show that went on and on.  It felt like an electric re-calibration of the energies of the valley and of myself.  I later discovered this tremendous electrical storm had been widespread over the whole island.

The Cabin
In the morning, Tony drove me down to his place, a simple cabin still under construction.  I discovered my little piece of Paradise was covered with 4 inches of freshly deposited mud - silt that had been left behind by the recent flooding. 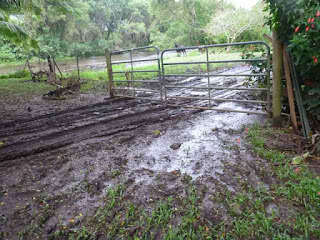 We squished up to our ankles in places in order to unload my stuff and carry it into the cabin. 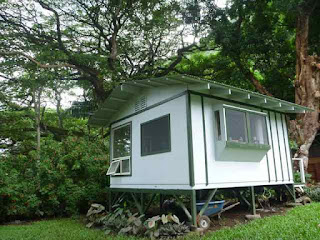 I was incredibly grateful to get all my luggage safely deposited inside without any of it (or either one of us) ending up in the mud.  Finally settled in on the valley floor, my experience of the magic and power of Waipi’o continued to unfold. 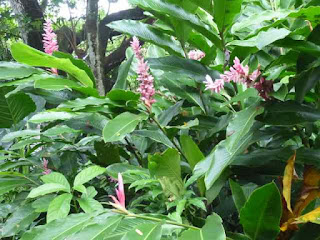 Posted by EarthSong Network at 17:15