The Frog and the Hot Water

Many years ago, someone told me a story about frogs and hot water.  They said that if you put a frog into cold water and slowly heat up the water, the frog would eventually end up cooked, because it didn’t register the gradual increase in temperature.  If, however you dropped a frog into hot water, it would immediately jump right back out. 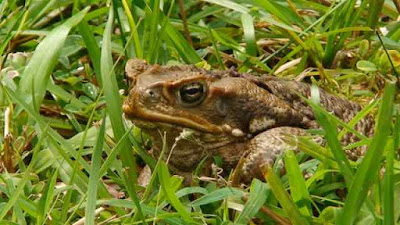 I think of this story often as I travel around the continental USA - the temperature of modern day living is definitely rising and getting quite hot in many places.  People are gradually being "cooked", numbed by the bombardment of their chosen life style, unaware of what is happening to the earth and therefore to them.  Having lived outside of America for so many years now, it is extremely alarming to return and see and experience the frantically busy, consumer life style that so many millions of people are caught up in.

I want to hop right back out.

So many individuals are so busy being busy that they don’t have any time to sit back and consider what their choices and actions are doing to the planet and that there might actually be a more preferable, simpler, happier way of living.

I have spent time in New Zealand with home-schooled children, who have not been allowed to watch TV, and so they are living their lives in a more real world perceived through their very own senses, rather than participating in a world perceived almost totally through the eyes and interpretation of perception of someone else.

EVERYTHING one sees, hears in the media has been first filtered through someone else’s personal point of view, opinions, belief system and agenda.  That is why having an abundance of wilderness and time to interact with it is so critically important.  Being out in the wilderness, having one's own personal, direct experiences with wildlife offers each person a place to discover their own wildness, their own true nature.

One perceptive young girl living on the North Island of New Zealand, the daughter of good friend, made a comment about an acquaintance of theirs whose life was involved primarily involved with shopping and her latest acquisitions. She referred to her as being a “television” person.  Rather than creating her life moment-by-moment, interacting with the natural world, she was caught up in shopping for a life she had seen advertised and was busy creating the money to afford everything she felt impelled to buy.

One of my biggest concerns as I revisit the continental USA after so many years away is what I call the vibrational pollution being caused by the increasingly technological lifestyle.

Because of my work with sound and using my voice to transmit different frequencies, I have become increasingly and acutely sensitive to all the different vibrational frequencies that are bouncing around in our modern, technological world.  Because I have spent so much of my time in the past 12 years in EMF-free zones, places where are no televisions, walk-around-phones, or microwaves radiating, places where there are no cell phone or WiFi signals bouncing around, I know what it feels like.

I recently sat with my daughter and granddaughter for few minutes watching a modern Bugs Bunny cartoon.  Elmer Fudd and Daffy Duck were still there, but were now playing the roles of Super Heroes and Super Villains accompanied by a horrendous, throbbing, punching soundtrack.  Wondering how they could stand to listen to this awful noise which was having an immense kind of pounding vibrational impact on our bodies, I realized that they must both have become numb and immune to those kinds of sonic vibrations, because the TV is on much of the time.  There is no other way they could bear something so incredibly toxic to the nervous system.

I know experientially how relaxed my body is when I am out in pristine nature, how much easier it is to think a coherent thought, how precious and uplifting it is to hear birdsong and crickets and frogs and doves cooing, the sighing of a gentle breeze, water tumbling over rocks in a stream — the natural sounds that are intended to calm our nervous systems and help us align and harmonize with our natural world.

I remember the email that got sent around after that huge tsunami hit Japan years ago.  How the people in one of the villages unexpectedly re-discovered the joys of a simpler way of living when their highly technological world was suddenly destroyed.

On a daily basis, for each one of us, it’s all a matter of choice.  But to make a choice we have to be aware that there is a choice.

Am I living the life I most want to be living?  What do I really want to be experiencing day-by-day, moment-by-moment?  And how do I create or allow that to happen?

Posted by EarthSong Network at 06:36