Listening To The Earth's Song

I have been most blessed to stay for a few days in Lake Shastina at new friend’s beautiful home, enjoying this awesome view from her deck: 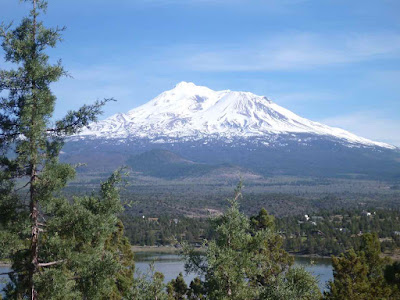 I arrived during Ilonka’s days off, so quite unexpectedly she has been able to drive me all over the countryside to a wide variety of places here in the Mount Shasta area.  It has been fascinating to watch my own personal emotional/energetic reaction to each place, often a bit different from hers.

In the process of singing to the Earth in each location, one spot after another, allowing myself to open, allowing the energies present multidimensionally in each place to sing through me, I realize that I am being shown still more about this Earth singing process as a form of communion, further deepening my ability to LISTEN to the Earth speak in each spot.

As I open and allow the energies to flow through me and try to match what is pouring in with sound and movement, it feels like I am being shown the state of beingness that each place is experiencing.  Feeling the energies as they sing and dance through me is like listening within to someone telling me a story about what’s going on in each place and what is needed for harmony and balance.

What I am having to focus on is getting my own emotional reactions and judgments out of the way more than I ever have before, in order to hear/feel what is actually coming from the other multi-dimensional energies that indwell each place - the elemental beings and forces, the Ancient Ones, the Ancestor Spirits, celestial energies, recent human emotional residue, as well as feeling the constrictions of man-made structures that may have interfered with the natural flow of life force energies in, out and through a place.

The huge gift of these past few days has come from the variety of states of being I’ve experienced while singing to each of the places we have visited in quick succession, one-by-one.  I am becoming more acutely aware of the "flavor" of the very different overall states of being in these different spots, and am witnessing how much more accurately I can receive the Earth’s Song (whether it be one of harmony and flow, or deadness and numbness, or conflict and great disturbance) when I am crystal clear myself.

The first place Ilonka took me to was the nearby Pluto Caves that were formed as a result of a collapsed lava tube. 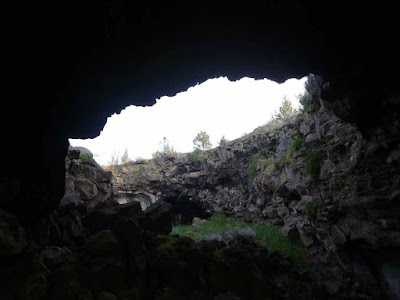 The energy there felt rather dead to me, numbed, withdrawn.  Not the alive vibrancy of lava rock that I am used to feeling.  The place appears to be highly visited and there is lots of graffiti painted on the rock, which gave the cave a suffocated feel to it when I sang there.  It felt like the sounds I made were being beamed back and forth through the lava tube, calling for the stone to awaken.  Evidently, the part of the caves where I sang is a sacred place where, long ago, native women would come to give birth.  Water made its presence known here by dripping from the ceiling overhead.

We had had an extraordinarily difficult time finding the Pluto Caves.  Our search took us up a nearby dirt road that was heavily trafficked.  The area did not feel happy and harmonized.  Something in that area there is really off balance and it feels like the earth energies have withdrawn their presence.  Was that what we were being shown by our detour?  Or is that simply my projection?  Perhaps when I saw all the graffiti, I withdrew my energies to a certain extent?

The next day we set out for Medicine Lake only to discover that it was still under 6 feet of snow.  So instead, we headed north to an old favorite haunt of mine, the wetlands at Tule Lake.  The spring migrations of water birds were in full swing and it was a perfect time to visit.  My own personal process got in the way a bit, so I didn't even attempt to sing there. 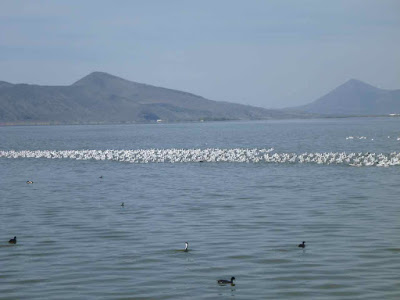 On our way back we stopped at Lake Justina. 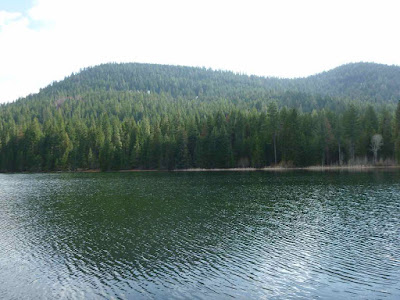 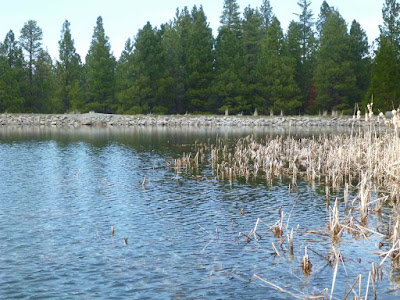 Standing out on the ramp, looking down at the water I discovered these very strange shapes.  Mutated, deformed frogs? 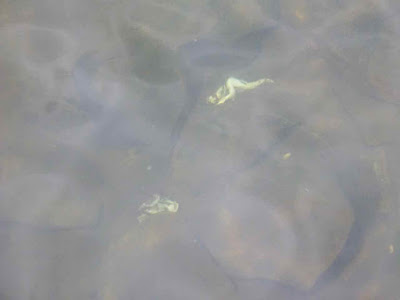 The place made me feel very concerned about chemicals poisoning the water here in an area of the world that is celebrated for its pure water.  What's really going on???

Over and over I get the message to not try to fix anything that's wrong, but to focus on bringing in the new, higher vibrational frequency energies.  While singing softly and meditating at Lake Justina, I got the strong impression that NOW is the time to focus on getting the High Tide movies out there.

As we continued on back to Ilonka's home, some rain spattered the windshield and we looked up to see that although there had been sunny skies when we arrived at Lake Justina, there were now big black clouds piling up over in that direction. 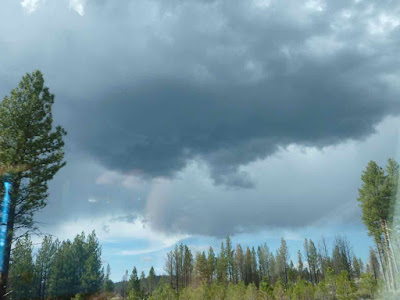 Straight ahead the sky was bright blue and the sun was shining. 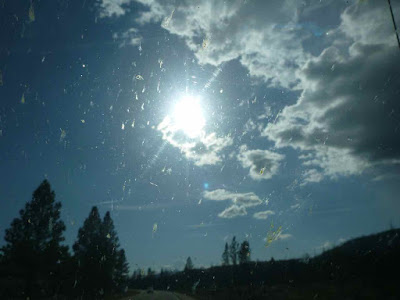 It felt like a reinforcement of the message I had just received.  The choice of whether to focus on the dark clouds and storms of life or to focus on heading in the direction of the light.

We came around a bend in the road to another awesome view of Mount Shasta, feeling the incredibly strong impact of its immense presence. 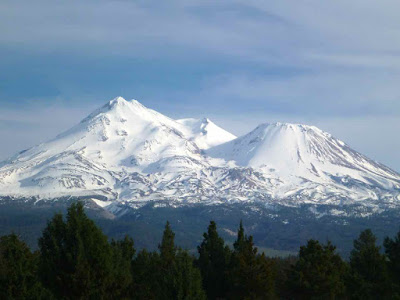 The third day our first stop was at Lake Siskiyou, another dammed, man-made lake. 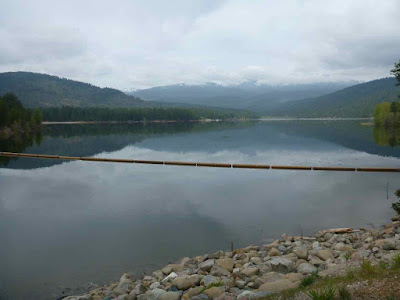 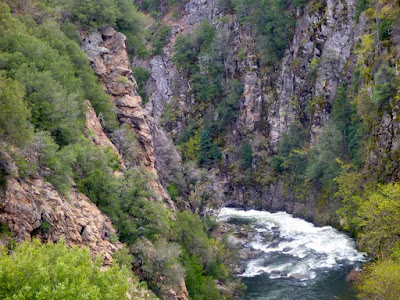 which was quite different than the area next to the dam where I stood to sing. 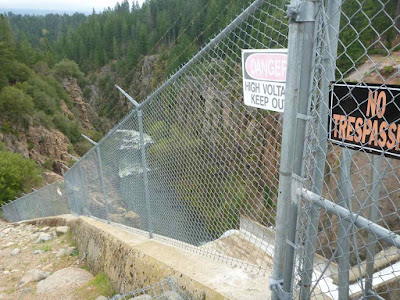 The impression I got as I sang was that there is a deep need for greater flexibility here.   The natural river breathes and pulses, can move and change.  The dam is a rigid structure that doesn't allow the kind of "breathing" that the river needs to be whole and healthy.

Our next calling was to Castle Lake where once again I walked in so that my feet were in the water as I sang. 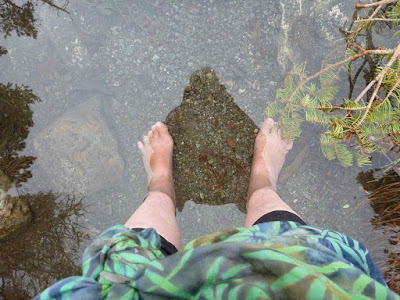 You can see the view of the lake I had while I was standing in the melted lake water in the foreground. 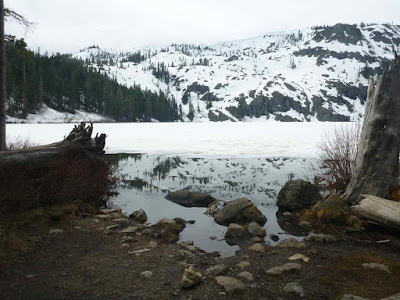 The sounding here seemed to be a calling out to every element, life force, creature being to fully be awake and living its full magnificence and to help to ignite and activate higher consciousness in every human who visits the lake.

Ilonka and I took pictures of each other next to the snow in the parking lot. 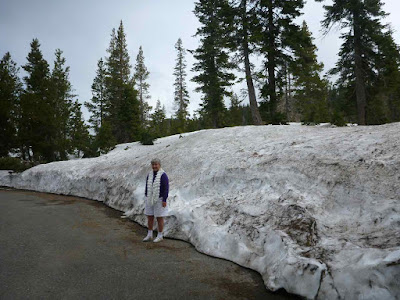 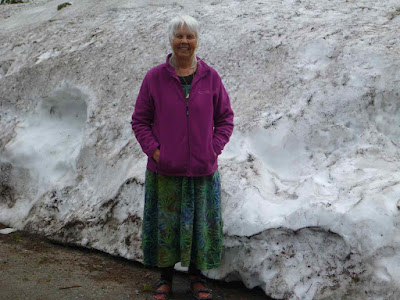 Then we remembered.  While at a crystal shop in Mount Shasta that morning, we had been given a crystal to gift to Castle Lake.  As I returned to the spot where I sang (as that seemed to be the spot the crystal wanted to be to do in order to share its presence with the energies of the lake) it began to rain, a very light, fine, misty rain creating little rippling circles on the lake's surface.  A wonderful acknowledgement and blessing!  Message received and rippling out!

As we drove down the mountain, we encountered the breathtaking view 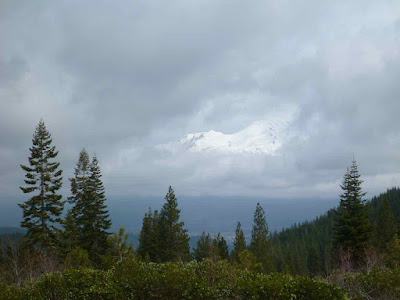 of Mount Shasta poking through the clouds.  It appeared do be floating in the heavens, peering through a hole in the clouds, sharing its awesome presence with us once again. 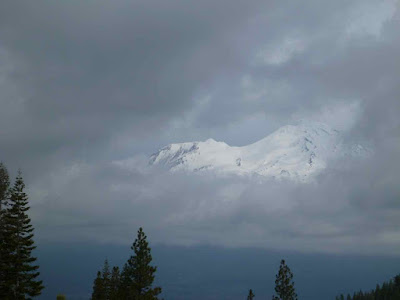 After a yummy lunch in McCloud, we continued on to our last place to sing at Fowler Falls.  We visiting the Middle Falls first, 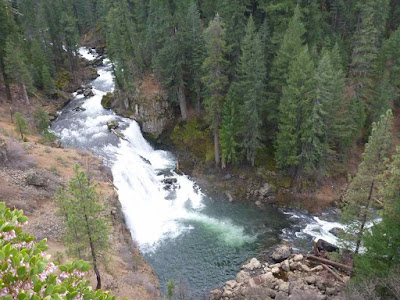 then checked out the Upper Falls 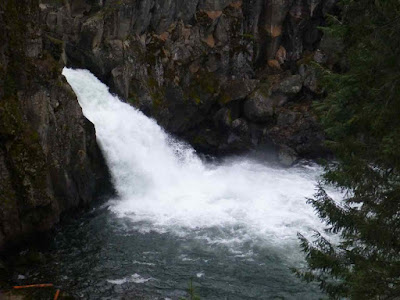 and finally the Lower Falls 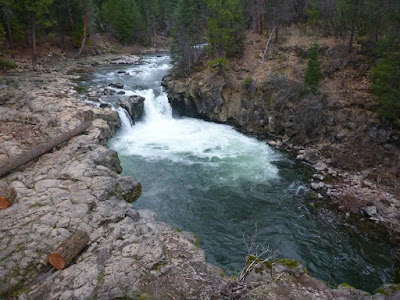 before deciding to return to the Middle Falls to sing to the water. 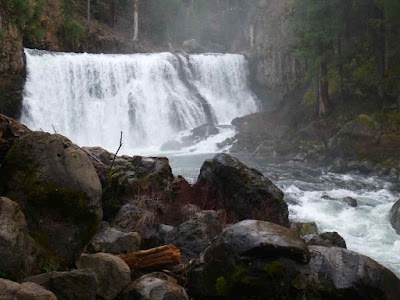 Ilonka led the way down to the river where we both found our spots to sing.  Singing here in this spot felt very whole, and all I felt moved to sing/sound was sacred Aums, spiraling energy through me from Divine source energies to the Earth and back.

Feeling the power generated by freely moving, flowing water is an awesome experience, especially in the spring when it is picking up and carrying all the various kinds of energies of life awakening and bursting forth into bloom! 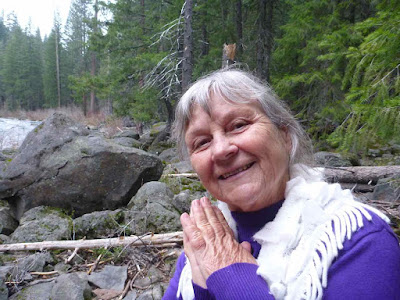 Posted by EarthSong Network at 11:50