The short section of a branch that I chose for my talking stick came from a giant Kauri tree in New Zealand called Te Matua Ngahere (Father of the Forest) which is 52 feet in diameter and is thought to be at least 2000 years old. 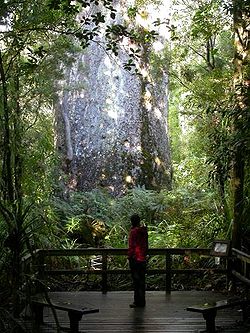 Te Matua Ngahere first called me to come visit him in 2004 and I have returned to commune with him many times during the twelve years since.

In 2010, I asked a good friend of mine who lives near Waipua forest (where Te Matua Ngahere lives) to please send me a piece of one of his branches to use as a talking stick during three days of ceremony that I was to lead at the June Solstice, 2010.   We created a series of ceremonies to activate informational springs at six different locations around the rim of the ancient volcano that forms the Dunedin Harbor on the South Island of New Zealand that year. 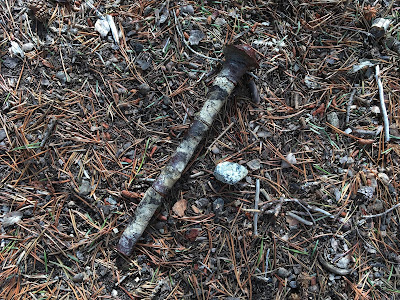 I have been carrying this talking stick with me ever since as I travel around the world to do my EarthSong energy work.  There were many times I used it for ceremonies, but could always could feel that some sort of deeper connection to it was possible, but didn’t know how to make that happen.

During a guided visualization led by Lynn Andrews to activate our talking sticks during the second class of The Power of Shamanic Communication a few weeks ago, I had a magical and totally unexpected connection with Grandmother Beaver.   When we got to the part of the meditation where Grandmother Beaver blesses our talking sticks, she suddenly leaped towards me, grabbed my talking stick, and swam straight down to immerse it in the mud at the bottom of the pond and then shot through the water erupting into the air and sunshine, connecting my stick with all the elemental forces.

I felt that this visualization was directing to take my talking stick to a natural lake or pond and mimic Grandmother Beaver's actions.

A new friend took me up to Castle Lake, a natural rather than man-made lake near Mt. Shasta  a few days later.  It turned out to be perfect timing as it was the day of the November Full Moon - a Super Moon no less, and - as I was thrilled to discover - it is called the Beaver Moon by some North American peoples. 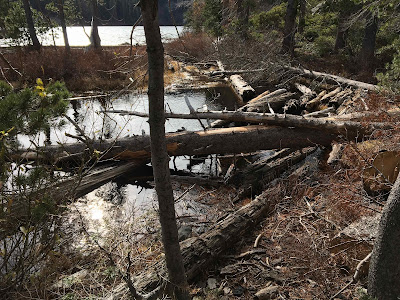 The water at Castle Lake was high and I was immediately drawn to the part of it where I imagined Grandmother Beaver would feel most at home rather than the place on the lake shore where I usually go to sing.

I sang to the Lake and the many Spirits of the place and connected with Grandmother Beaver.  The wind blew fiercely.

I mimicked the movements I had seen in my vision by putting my stick down into the mud at the bottom, then lifting it high into the air and the sunshine. 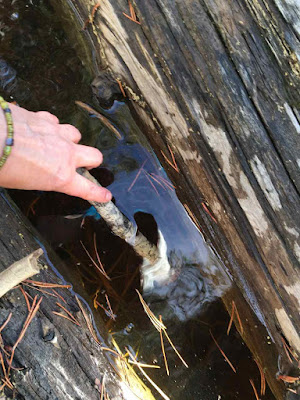 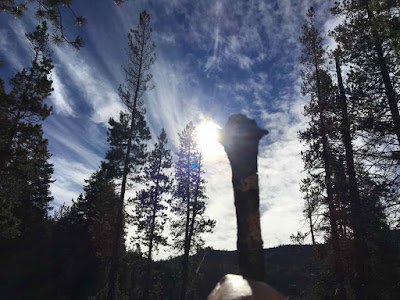 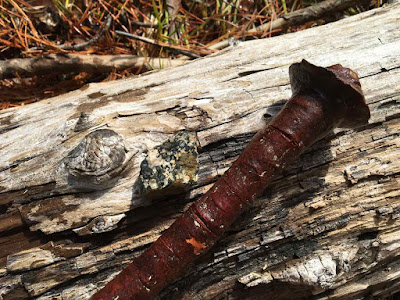 I gave thanks to all the Spirits at the lake and the wind blew so forcefully that in one narrow section of the lake, the top of the water looked like sound waves were rippling along its surface.  It felt like my talking stick and I were now activated to work with each other, speaking, singing, and sounding the highest truth.

I again sang my appreciation to the elements, and again the wind blew, this time creating a joyful path of sparkles across the water.

After that my friend and I drove as far as we could get up on the slope of Mount Shasta and I sang the mountain’s energy into my talking stick as well. 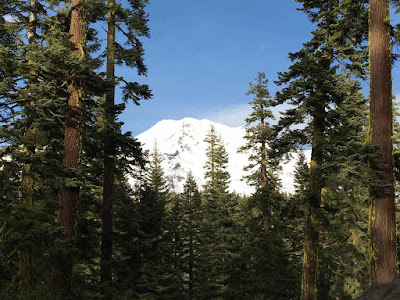 Back home I shared a couple of these photos with the Power of Shamanic Communication Facebook community and one of the members pointed out the design on the surface of the water.  When I blew up the photos I had taken that day up at the lake, I discovered that the dragon and wolf spirits had also participated in the ceremony. 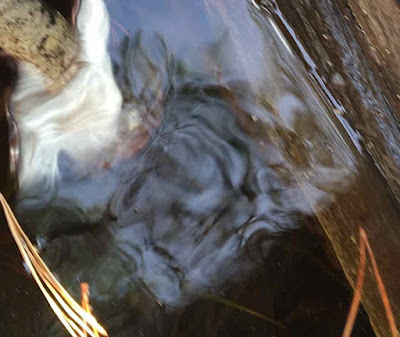 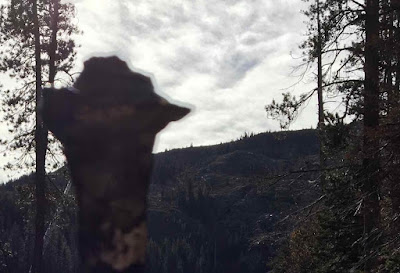 A few days later, after the talking stick had a chance to dry, I found that the outer rim of bark had separated a bit from the inner core.

I spent several days pondering about whether to remove the bark or let it be and enjoy the texture and cracks.  At my age, I appreciate the natural beauty of the rough, cracked surface. 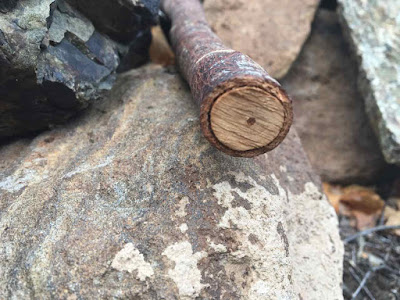 I woke up a few days later with a dream in which the bark fell away in big hunks.  After talking to a dear friend of mine in Hawaii who said she often kept the bark from her sticks and used it to make offerings to the Spirits when she did ceremony.  That gave the reassurance I needed to move forward with removing the bark.  It felt quite precious to me and I wanted to honor it and not just throw it away.  The dream carried the message that if I soaked the stick and then dried it, removing the bark would be a much simpler process.

Another friend took me to the headwaters of the Sacramento River where I collected spring water to use for soaking the stick. 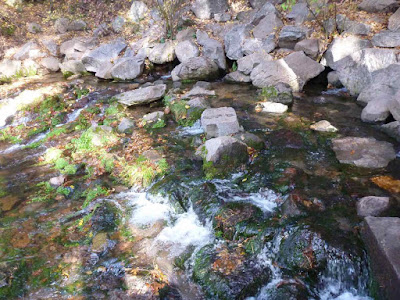 So once the bark was softened, I tried using a stone to remove the bark, but that didn’t work with the tough thick bark on this stick.  I then thought about using a knife, but using metal felt really, really wrong for some reason.

I finally remembered a quartz crystal I carry with me and with which I have a deeply profound connection.  It has a razor sharp edge and when I dried it, I discovered that it worked really well for scraping away the outer surface of the bark. 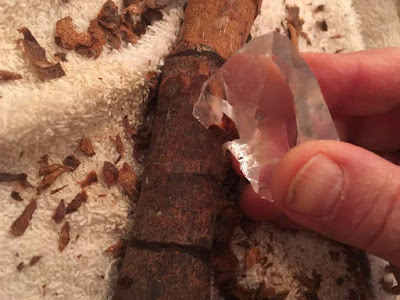 Scraping away the bark was magical while the wood was wet.  All sorts of faces of different creatures appeared as I removed the outer surface.  Kauri trees are very complex communities as many different species of plants and animals make their homes in their branches.  It felt like the spirits of the plant and animal kingdoms were making themselves known to me and deepening our connection.

However when the stick dried, it still had deep cracks and the bark had separated even more from the inner core. I could now see the wood of the inner core through the crack and felt quite curious to see what was underneath. 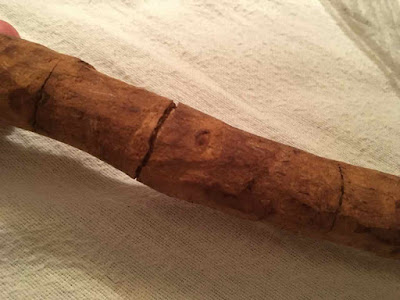 So once again, I soaked my talking stick overnight and waited for it to dry out.  This time I used my crystal to chip away the bark and it did indeed come off in larger chunks. 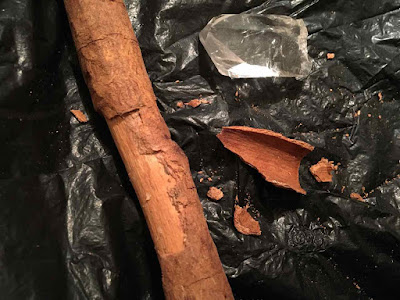 I kept the precious bark so that I can use it in future ceremonies. 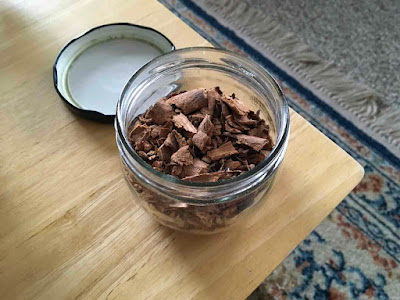 After the stick dried completely, I rubbed it with coconut oil, to include the spirit coconut trees and to honor my connection to Hawaii where I have learned so much about connecting and communing with the Earth.

We were told we could decorate our sticks with symbols, but for right now the simplicity of the inner core of wood feels like the most important symbol.  To simply speak my truth.  Always.  To know that I am connected to All That Is.  Always. 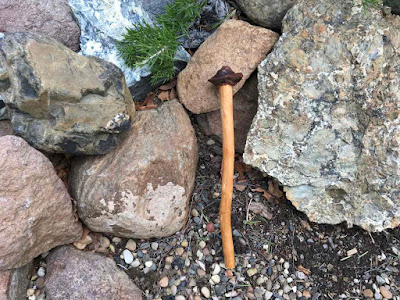 During our class, Lynn Andrews also talked about each talking stick having a place that was the home of the oracle.  As soon as she mentioned the idea, I sensed that it was somewhere near the top of the stick.

So after pealing off all of the bark, I was delighted to discover this face at the knobby end where the branch once connected with the rest of the tree. 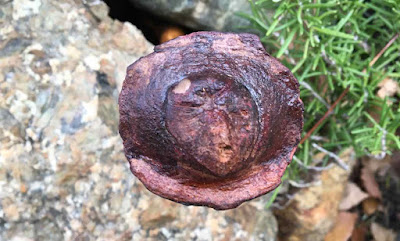 I thought how appropriate.  The stick's oracle speaks out of what would be the crown chakra of the stick and the place where it connects to it's source of energy.

A powerful reminder to always speak the highest truth from my direct connection to Source.

I am curious to see what unfolds next in this journey with my talking stick.

Posted by EarthSong Network at 10:15