I am constantly aware of the presence and power of Mount Shasta here where I'm staying in Lake Shastina.  Before I went to sleep last night (the Solstice, June 20, 2016) I asked to wake up clearly knowing more about my life purpose and next steps.

It was amazing!   I woke up this morning with a rush of vivd memories about interactions with a wide variety of crystals over a period of 30 years, knowing that I will be working with crystal allies with much more conscious awareness from this time forward.  The various memory "pieces" slipped into place, like solving a jig-saw puzzle, and included intense interactions I had with a huge crystal cluster a couple of years ago.

My parents were preparing to sell their home in Ashland, Oregon and my mother gifted me with a huge cluster of beautiful quartz crystals that she had purchased in Arkansas.  She knew I couldn't keep it, but thought I could sell it to raise money for my EarthSong travels.

I decided to visit a couple of crystal shops in nearby Mount Shasta, and see if I could sell the cluster there.  There was an important Earth Energy activation day coming up on Jan. 24, 2014 so I decided to take the cluster with me up on the mountain before going to town to see about finding it a new home.

With the cluster sitting in the trunk of the car, I sang to the Earth and then drove down to the crystal shops where only one expressed any interest.  I was given an estimate of its worth and an offer to sell it on a consignment basis - the asking price to be $4444. 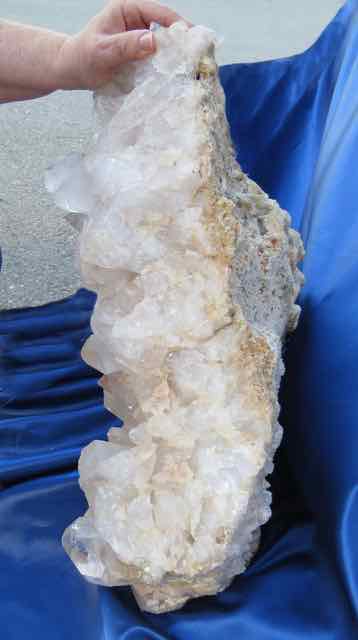 Intuitively it didn't feel like I was done with the cluster.  I just couldn't leave it at the crystal shop at that time.   Returning to my parents' home, the process of keeping the crystal cluster and finding a place for it to live temporarily, triggered an explosively emotional, earth-shaking - or should I say - "reality-shaking" event amongst the three of us.

For me it triggered a rage-filled memory from what I believe was an Atlantean life-time.  It felt like I had been part of an event where crystal power had been used with incredibly destructive results.

I had avoided working with crystals up until that point this lifetime, although crystals had come to me through the years which I wore and that "worked on" me.  The intense emotional explosion that was triggered by the crystal cluster opened the door for me to begin intentionally working with crystals, collecting them and learning more about how to consciously co-create and work with them as allies.  A piece of the quartz crystal cluster broke off as we were trying to move the cluster into place. I cut my finger on it's razor sharp edge.  I carry that single crystal with me everywhere as I travel, it's sharp edge reminding me to never use the power of crystals in a way that is anger- or fear-based.

It felt to me like the crystal cluster had been quite damaged by the extreme negative emotion of that explosive triggering event and I felt greatly responsible for the cloudiness that dimmed its former brilliance and beauty.  A chance encounter with a man a few weeks later, who did a great deal of power energy work with crystals resulted in a new home for the cluster. Instead of the $4444 I had to settle for $500, which was not at all enough to go to Bali, the next place to which I was being called to visit and sing to the Earth.  I soothed myself with knowing that I had gotten the crystal cluster to its next best place.   Magically, the money I needed to travel appeared from a very different source and helped me get to my next best place to do what I am meant to do.

A year later when I returned to Ashland for a visit, I again met the man who had bought the cluster from me and he convinced me to visit his home and see for myself what had happened.

He said that the crystal cluster was Lemurian and that it had "talked" to him and told him that if he would allow his crystals to heal it (he had many, many huge crystals of all different kinds that he used in his healing practice) that the cluster would then heal all his crystals in return.

He told me how unbelievably quickly the crystal cluster had regained its brilliance and clarity and held up one crystal after another to show me how each one of his was now cleared of its former cloudiness.  It felt really good to know that I had gotten the cluster to where it was meant to go, to do the work it was meant to do.

Many years ago I was "called" to visit Sedona in December and discovered that a big ceremony to celebrate the 12/12 was to be held up on Cathedral Rock. As I sat in my car, waiting, a song came to me: Weaving the World, with the lyrics: "We're weaving the world into a grillwork of light . . " (You can listen to it using the link is down below). I met a man during that visit that I had seen in my mind's eye as I was driving from the West coast across country to Sedona,  He was starting to climb Bell Rock just as I was coming down.  We visited several vortices together during our time there and when we parted, he gifted me with a beautiful piece of moldavite which he had brought with him from his home on the East coast.  That piece of moldavite opened me to a whole new experience of reality.  I wore it for many years until I knew it was time to pass it on.

When I was in Sedona this past March, I went into several shops to find some crystals that I had not been able to find on the Big Island of Hawaii.  As I entered the last one I was powerfully drawn to a tray of a lovely light yellow-green stones called Healerite.  Because of my traveling, I looked for and finally found some smaller, cheaper Healerite stones and purchased one of them.  I could feel the magnetic pull of the Healerite display tray as I left the store and by the time I reached my car the cry was so loud I had to turn around and go back in to find the particular stone that was calling out to me, determined to come work with me.  A posted article about Healerite listed "repairing the Earth's etheric field where it has been damaged" as one of the stone's many important healing abilities.

I exchanged stones and left the store with my new friend.  I also received the strong impression that there was a companion Healerite stone that would be joining us, but that it was not in Sedona.

When I first arrived in Mount Shasta, I visited one of the new crystal shops and chatted with the lovely young woman who worked there about sound healing.  When I turned to leave the store, she said, "I am feeling that I should give this to you.  It was gifted to me and I now gift it to you."   It was another lovely piece of Healerite - so similar in appearance to the stone I bought in Sedona that they could have been twins, extracted from the exact same source. 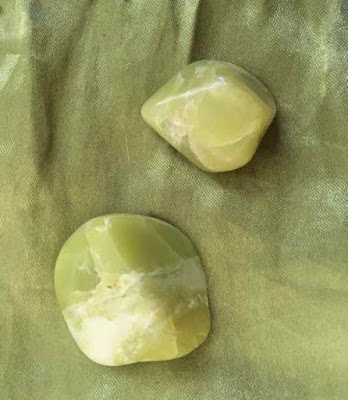 A week or so ago, I listened to a series of sessions where Lee Carroll was channeling Kryon at the Wegner Crystalline Mine in Mt. Ida.  He spoke about how in the new energies it is now easier to "hear" crystals and how they are coming "on line" and making themselves available to help humans and support humanity's and the Earth's evolution at this time.

Kryon also talked about the fact that a crystal can be a catalyst of information that is personal to you.  You buy it, take it home, and it starts talking to you about what you need to know.

This morning, looking back at the intense crystal cluster interactions of a couple of years ago in light of the information I received listening to these recent Kryon channellings,  I realized that that my crystal cluster had probably come from the area that Kryon was speaking from in Arkansas and that it had made it's way from one situation/location to the next, making immense catalytic energies available to each person to which it "belonged".   I realized that when I sang to Mount Shasta in the cluster's presence over two years ago, something new and powerful was activated in each of the three of us: the cluster, the mountain and I.

The past couple of years has involved opening to communion/communication with all sorts of life forms.  So many experiences have come my way in which different plants, animals, trees, insects, volcanic stones, ocean waves, and a variety of different crystals have all shared something important with me if/when I noticed them and stopped to listen to whatever they had to offer.

May we all grow in our desire and ability to listen to the many voices that sing the Earth's Song.

Link for hearing "Weaving the World" on Youtube.
Link for Kryon channellings about Crystals at Mt. Ida, Arkansas

Posted by EarthSong Network at 05:23