When I first became aware of the inner impulse to go to Rapa Nui (Easter Island) and Lake Titicaca and to sing to the volcanoes in the Andes, I couldn't believe it because I have never, ever had the slightest desire to travel anywhere in South America.   I started reading anything I could find here in NZ that would help prepare me for the trip.  The lists of possible physical, political, financial and health dangers to travelers were quite overwhelming when combined with the uncertainty caused by the high powered transformational energies that are constantly coming into the planet this year.

When my NZ work permit was up March 31, 2013 I headed off to Tahiti (which is where I had to go to catch the flight to Easter Island).  Because of all the resistance I was feeling, I created a situation that allowed me to experience all my fears about what might go wrong in South America and after 5 days in Tahiti with no money, no internet and no phone in a French speaking country,  I was popped back to NZ.  However, for every one of the numerous problems I created for myself during that aborted attempt to go to South America,  I found that my guides and non-physical helpers were able to come through with some sort of solution.  I was totally taken care of. 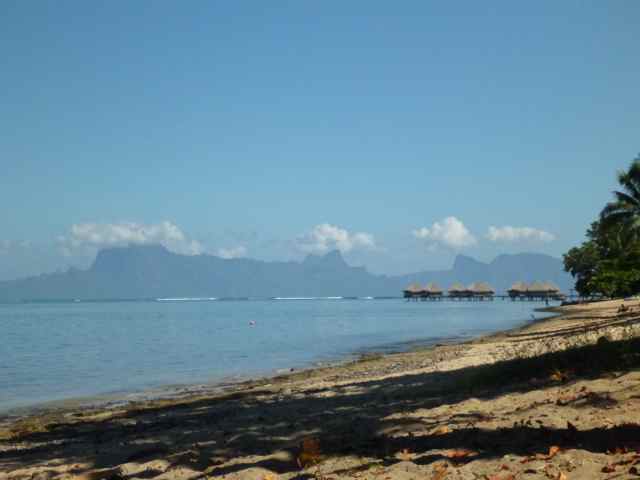 Part way through the 5 days in Tahiti, I became consciously aware of my negativity and deliberately raised my vibration and set a clear intention for what I wanted to experience instead.  Within half an hour everything shifted and I was invited to go home with a lovely Tahitian family to help them practice their English.  Having arrived in Tahiti with dark clouds over my head, I found myself being joyously farewelled by the whole family ceremonially when I left.

On my way back to the South Island I was incredibly blessed to have a divinely orchestrated meeting with a beautiful, very high vibration young man from Argentina.  I came away from my few hours with him feeling like I had had a magical swim with the dolphins.  For several weeks I clung to the idea that somehow he would come with me to South America as a companion and guide.  I didn't really give up hoping for that right down to the moment I left Auckland the second time for Tahiti on my way to South America.

I gradually came to the realization that meeting him had been not about traveling with him, but was instead giving me the experience of the state of being I needed to maintain if I were to accomplish what needed to be done in South America.  I needed to be in a very high vibrational state if I were to be a match for hearing my guidance accurately and for meeting the high vibration people who would be helping me.

My guidance was to take my computer, but not to take power adapters for my computer for each of the countries and not to take a cell phone or a camera.  I didn't get any immunizations, and I didn't take a first aid kit or any medicines.

Other than the airline tickets to Easter Island and then on to Santiago I had no reservations or bookings for anything else.  I didn't know where I would be staying or how I would get around in South America.  When I left I didn't have enough money for a return ticket.  It was definitely a journey of trust.  And over and over and over again I was totally taken care of in the most unexpected of ways.  Because I was traveling by myself in Spanish speaking countries, with very little Spanish myself, the only way I had of finding my way was to listen to my guidance.  At each choice point I was shown where to go, when to go, and someone always showed up to help me communicate.  I came to trust my guidance even more deeply because I simply had nothing else to go by.

Before I left, I thought my main purpose in going was to do my EarthSong energy work to help with calming the Earth energies in the places I was being guided to visit.  Singing to the Earth is one of the powerful ways of gifting loving human energy to Gaia and helps calm down and ease the massive physical changes she's currently experiencing.  What I discovered as I visited each of the places that I was called to was that in addition to the EarthSong work there were very personal reasons for my visit.  I was being taken to places where I had experienced past lives that have had important impacts upon me this lifetime.

When I stepped out of the door of the plane when we landed on Rapa Nui/Easter Island the energy of the earth there was amazing.  "This is the way the earth should feel!" was my first powerful impression.  I had thought I would be going to visit the big stone figures, singing to them and the lava stone from which they were carved.  Instead, I did most of my singing from my campsite.  I stayed in a tent just across the road from the rocks you see in this photo that a fellow camper took of me at sunset one evening.  Later I found a map of Easter Island and discovered that the campground had been on a piece of the island that jutted out into the ocean facing west towards New Zealand and Hawaii, the two main places I was connecting with energetically. 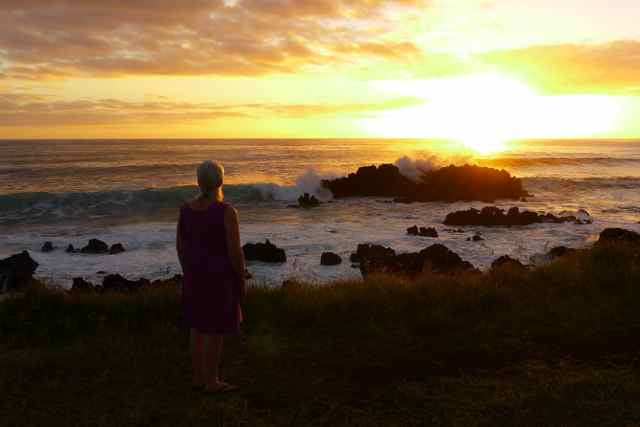 I also sang up on the rim of the nearest volcano where I could see most of the island and was later led to a sea cave that was the opening to a lava tube.  When I sang there the colors in the lava rock across the top of the cave glowed intensely.  It felt like validation that my attempts at communion with the earth energies and spirits of the place were being acknowledged.

When I landed in Santiago I was immediately whisked away by bus up north, experiencing all sorts of unexpected "helping hands" along the way.  Arriving in San Pedro de Atacama, Chile I felt very connected to this volcano (Licancabur) from the first moment I saw it. 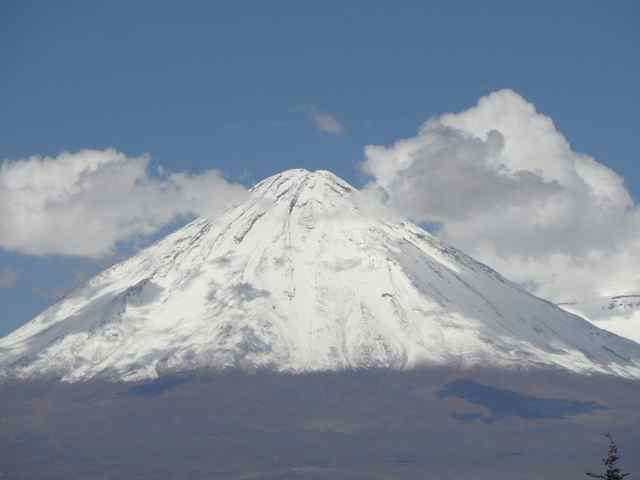 
I overdid it my first day in San Pedro, not realizing that the altitude was 2480 meters rather than feet.  My feet and ankles and lower legs got so swollen that capillaries burst.  So I spent most of my week there in bed with my feet up.  The hostel I stayed at was on the side of town closest to the volcano and I did most of the energy work from my bed.

While I was there I first dreamed about and then was shown a place that triggered the memory of a lifetime where I was sacrificed as a 15 yr. old virgin.  It was at the top of cliff that had a clear view of Licancabur.  I'm quite sure I must have had many happy moments up there leading up to the ceremony that ended that lifetime.

I met the man who in that Incan lifetime was the priest that cut out my heart while I was still alive.  Only the most perfect children were selected for the sacrifice.  I have recently been having difficulties with my heart and felt I was shown this past life in order to facilitate the healing of my heart this lifetime.  The memory also helped me understand the feeling I've had of needing to hide my true self.

By the time I got to Lake Titicaca, it was very clear that I needed to spend two weeks on Isla de Amantani.   I stayed with a Qechua family and because of the extreme altitude I once again spent a lot of my time in bed to minimize its effects on my body.  Because I had no TV, no internet, no electricity for my computer, no cell phone, no books, no sudoku puzzles, and I didn't have to prepare or cook any of my food or wash dishes, life became very simple and present moment.  I spent lots of time gazing out the window at Lake Titicaca and the Andes of Bolivia, absorbing the incredibly peaceful and deeply grounded energy of Lake Titicaca and tuning into the Lemurian lifetime I experienced on that island long ago.

A favorite place of mine on Amantani to sit and rest during my walks uphill: 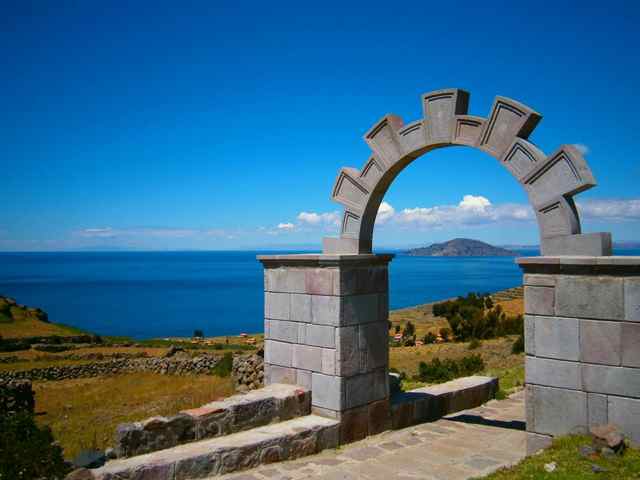 Over the two week period I spent on Amantani I was able to little by little lengthen my walks so that by the Solstice I was able to climb up to the top of the island and sing and connect to so many of you in the place where several of us co-created ceremonies together many thousands of years ago.

I have been extremely blessed to have had the past 3 weeks to recover, assimilate and begin to integrate the profound effects of that trip, staying with special friends in Hamilton on the North Island of New Zealand.  A great deal of what I have needed time to assimilate is this new way of living where I am so complexly connected multi-dimensionally and focusing on my vibrational level of being rather than on making things happen by doing, controlling them with my rational mind.

For the 5 weeks in South America, by listening to my guidance, I was totally taken care of everywhere I went in South America.  I came back with all my luggage, nothing was stolen, I caught no diseases.  I met wonderful, kind, warm-hearted people everywhere I went, fellow travelers as well as local people.  The timing for connecting with each bus, plane, boat, etc. was magical.  The vehicle would be leaving just when I needed to move on.  Each place I stayed had room for me for the length of time I needed to stay even though I hadn't made reservations.

My friends in Hamilton recently took me sailing to Rangitoto, the youngest of the volcanoes in the Auckland area, and feeling the difference in the quality of Earth energy there after the deep, still ancient energies of Lake Titicaca was quite profound.  The energy of Rangitoto felt very vibrant and young and new and alive.  We were blessed by dolphins swimming around us during our return to the harbor.

My guidance is to go to Tonga next, to visit and sing to an island that is 40 million years old, and to sing to and swim with the whales.

I am extremely grateful for all the love and support and energy that I could feel so many of you beaming my way!  My heartfelt thanks to those of you who have helped support my EarthSong work with your generous donations!

Many blessings to all of you on your own journeys of expansion and transformation!!!!!

Posted by EarthSong Network at 18:08